Great Win For U10s Against Gwent 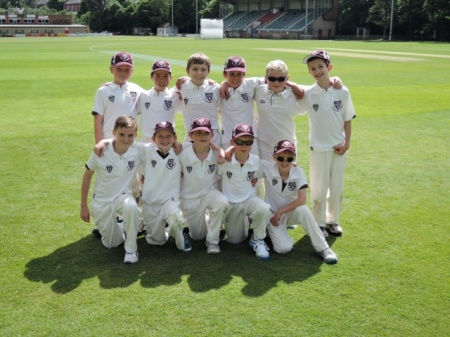 Congratulations to our Under 10s who put in a fantastic team performance to defeat Gwent Under 10s by 104 runs at Ebbw Vale Cricket Club on Sunday 3 July.

After winning the toss, captain Fergus Morris chose to bat first and was rewarded by an excellent batting display.

Opener Freddie Ammonds was the mainstay of the innings, carrying his bat for an impressive 78 not out, while George Skerrett and James Pattison also batted very well in partnership with Freddie for 23 and 21 respectively.

Herefordshire were eventually bowled out for 156 in 34 overs - a total everyone felt was competitive.

In reply, Gwent had no answer to Herefordshire's opening bowlers Tom Kennedy and Pattison, who quickly reduced the home team to 8 for 6 due to disciplined, accurate swing bowling.

The home team reached 52 before Tom returned to the attack to take the final wicket, meaning he finished with excellent bowling figures of 3 for 3, while James ended the innings with 4 wickets for 7 runs from his terrific opening burst.

The fantastic fielding is also worth mentioning - 3 catches and a run out proving vitally important in bowling out Gwent.

All in all a great day with our boys playing terrific cricket. Well done to you all and thanks also to Ebbw Vale Cricket Club for their fantastic hospitality.