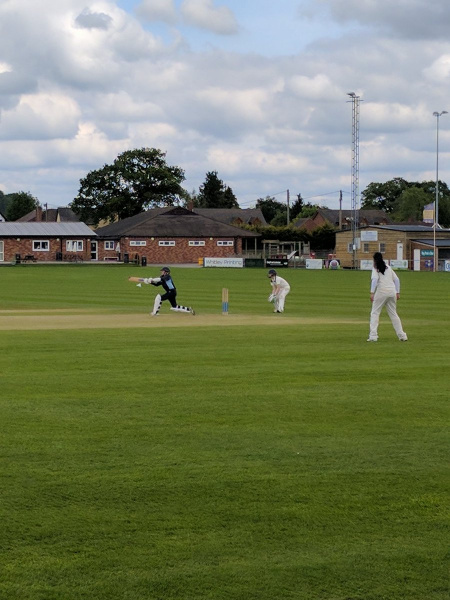 Harriet Shuker Wins the Ted Woodriffe Young Sportsperson Award
As a result of an outstanding 2017 cricket season when she once again showed what a fast learner she is and the potential that she has, Herefordshire Cricket’s, Harriet Shuker, has been awarded the Hereford Times, Ted Woodriffe Award for the Outstanding Young Sportsperson in 2017.
She first started playing cricket at Fownhope Primary School, before then joining her local club, Brockhampton. Harriet quickly progressed and she became part of the Herefordshire County age group set-up aged just 9, when she was selected for the U11 squad.
On moving to Bishop’s School in Hereford, she continued to progress, playing Ladies Taverners cricket and representing the school teams in hard ball cricket.
Ahead of the 2017 season, Harriet became captain of the Herefordshire Under 13 girls team and led from the front in every fixture. Her team went on to win 5 fixtures in total, including memorable victories over Cornwall, the Warwickshire Development team and Wales Under 12s.
In total, Harriet scored 315 runs in 6 innings, including scores of 63 against Wiltshire and 73 against Worcestershire.
However, the highlight of her season was the stunning performance she put in against the Warwickshire Development team at Luctonians when she scored a magnificent 128 out of her team’s score of 271-9, before following this up with a quiet brilliant performance with the ball, taking 8-11 off just 5 overs.
Harriet not only shone for Herefordshire during 2017, her exploits meant she enjoyed plenty of cricket elsewhere too. She helped out Shropshire county teams on a number of occasions, played for Worfield in the West Midland Womens League, and was also selected to play for a National Festivals team on their tour to Barbados.
And all this extra came in addition to her own junior club games and several appearances in the Marches League for Brockhampton 4ths.
Harriet’s impressive performances also saw her offered a scholarship at Shrewsbury School – one of the top independent schools for cricket in the country - which she started in September 2017. As well as focussing on her academic work, the move allows Harriet the opportunity to be coached by former Glamorgan and Warwickshire professional, Adam Shantry.
Speaking about Harriet’s achievements, Herefordshire Cricket’s Operations Director, Steve Watkins, said:
‘Harriet had an outstanding 2017, and everyone at Herefordshire Cricket believes she is a deserving winner of the prestigious, Hereford Times Ted Woodriffe Award.
‘From the very first day she picked up a bat, her passion for the game has always been obvious and she really does improve with every game she plays.
‘We are very proud she plays for our county and her performances help inspire the other young players around her. We are all looking forward to seeing what the 2018 season brings – as long as she continues to enjoy the sport and work hard to get better, she undoubtedly has the potential to go a very long way.’