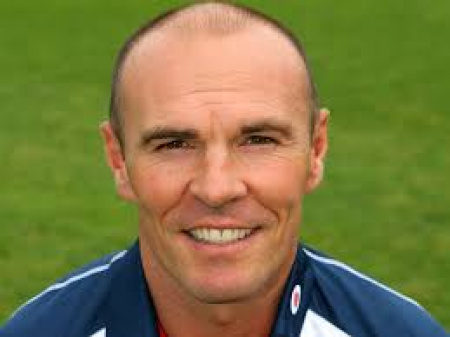 The current Leicestershire CCC Head Coach will speak and present the Divsional Awards at the GB Liners Marches League on Friday 12th Ocotber, 2018 at the Three Counties Hotel

Paul Nixon is one of a crop of wicket-keeping batsmen who came along at the wrong time for an international career. His path into the England team was blocked by Jack Russell and especially Alec Stewart as the team tried to find an allrounder. Nixon's one taste of the top level came when he was Stewart's understudy on the 2000-01 tours of Pakistan and Sri Lanka. However, despite his lack of chances to prove himself with England he has been a fine servant in county cricket. For the two main stints of his career that has been with Leicestershire, where he helped them to their two Championship titles in 1996 and 1998, before joining Kent from 2000 until 2002. He was a popular player at Canterbury and helped improve their one-day cricket but with the emergence of Geraint Jones the club couldn't afford to keep both. He returned to Leicestershire in 2003 and slotted straight back into their team ethos. His role in Twenty20 cricket has been crucial and he is one of the best players of the reverse sweep in the county game (and possibly world cricket). Still an ultra-competitive player whose drive to be successful hasn't dimmed, that was rewarded when he was surprisingly drafted into the England one-day side in Australia in 2006-07 and did well enough to hold on to his place for the World Cup immediately afterwards, where he was solid with the bat - if not spectacular - and forever experimental with the vocals. Named in England's 25-man development squad it appeared he was heading for a Test debut at 36, but was overlooked for Matt Prior. Superbly fit and motivated, he remained an important part of Leicestershire's set-up and after the 2010 season signed a new one-year contract with the county. He announced his retirement from cricket during the 2011 season ending his 23 year career by helping Leicestershire win the NatWest T20
In late 2017, after a poor season where they failed to win a game Paul was appointed Head Coach of Leicestershire CCC , when they finished 6th in Division 2 with 5 wins.